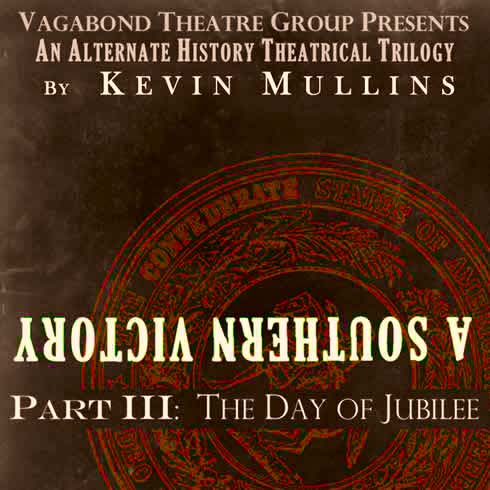 The big challenge -- aside from guiding a playwright through the completion of a three-play series -- was how to actually, realistically, mount a project of this size. ASV-- as a work -- was a linear piece of storytelling. Part II followed Part I, and Part III came thereafter. Audiences needed to see them in order. Back in the days of Actually-Going-To-A-Theater, this was extremely difficult to schedule. We had had enough roadblocks producing, rehearsing, and audiencing a well-recieved reading series, and this was exponentially more cumbersome. What emerged was a rotating choose-your-own-adventure schedule over the course of our four week run. Out of necessity, we provided multiple paths and made the widest possible allowance for the audience to engage with the piece, in proper order, including both font-loading Part I performances and running all three shows in a back-to-back-to-back showcase each Saturday. As a solution, the schedule was unconventional (to say the least), and daunting, but the work was electric. We wanted an audience to experience it right. Those euphoric closing moments of a packed three-show Saturday will forever be etched in my memory.

It is a vexing logistical problem -- how do you present (and mount, produce, rehearse, and workshop) this breed of large and ambitious theatre? Breaking a story is challenge enough, dragging it into the real world is another. And while we ultimately found the ASV process to be incredibly rewarding and quite successful, it most definitely alerted us to a large disconnect between the practicalities and the possibilities of adventurous, long-form theatrical storytelling.

Now. What has all of that got to do with The Wrestling Play?

A lot, as it turns out. A project like Through the Big Times and Back is undoubtedly going to come up against the same obstacles. It is large, and sprawling, and complex. How do you rope in an audience? And how do you guide them through the lives of Rookie Jones and Buck Nero and Helen of Broadway? How do you support this ever propagating universe? And how do you keep it accessible, propulsive, and engaging?

With the Big Times Project, we have the opportunity to experiment and remix and re-mold the way in which we present our stories. Traditional theatre making is not the only sandbox. It shouldn’t be. And even in an uncertain pandemic world, we’ve begun to explore the possibilities.

So far, the Dread Zoom has been an invaluable asset to the development of the work in the time of The Great Pause. Not only were we able to have regular weekly development readings without the real-world complications of rental space, restrictive schedules, and travel, but our August-through-December 8-part reading series was online, accessible, and archived. In this first public presentation, audiences were able to meet our team halfway, catching up when they could, and were more able to carve out an hour or so of their time to watch the performances live. As a result each part in the series ticked up hundreds of views a piece, and the open-watch capability let our audience grow over time. No one was shut out if they didn’t want to be. This was a great start, and it shows us the way forward.

As we launch into Phase II of The Big Times Project, we see an abundant field of possibilities stretching out in front of us. We’ve done this before. It’s worth doing. It’s worth expanding. And it’s time to get creative. The words and characters Zach has provided us establish a wonderfully rich and engaging bedrock to build on, and as our team finds new ways to manifest their stories -- digitally for now (while the world rights itself) and then Live! and In Person! -- we want to make sure that you, the audience, have all the access you could want to chronicle the lives of those in our warring territories. After all, what good is a story without someone to experience it?

We’re outside the box now. Online performances? Podcasts? Curated live showcases? There are big things coming for the Big Times. You’ll just have to wait and see what comes out from behind the curtain, through the ropes, and into the squared circle.