Once Upon a Time in East Rutherford, New Jersey - Part I 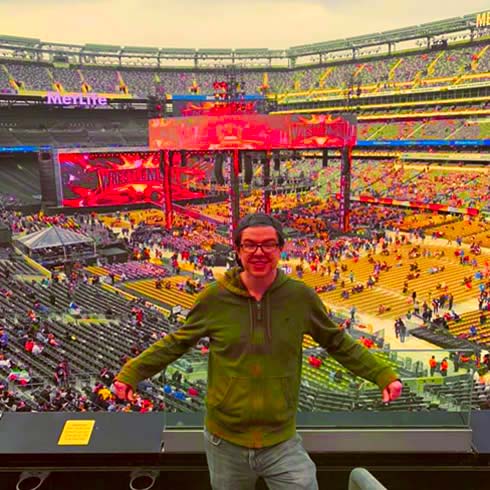 It was a cold night at The Meadowlands - April 7th, 2019. Outside the stadium, The President of the United States was mocking asylum-seekers from the southern border, Ecuador was threatening to expel Julian Assange from their London embassy as a fugitive, and the once-triumphant praise for HBO’s Game of Thrones was dying an unceremonious fever-death in its final season.

But inside, Mike ‘The Miz’ Mizanin was suplexing Shane McMahon off a 30-foot lighting scaffold, Kofi Kingston was becoming the first African-born WWE Champion, and women were competing in the main event of a major professional wrestling card for the first time in history.

This was the thirty-fifth edition of World Wrestling Entertainment’s annual WrestleMania event.

We were four grown adults watching other grown adults pretend-fight in their underwear on a chilly night in New Jersey. It would be weird if it weren’t for the fact that there were over eighty-two thousand other people doing the exact same thing (not-to-mention the six-hundred-thousand others watching from home).

The first match started at five o’clock that evening, with the main event ending sometime around half-past midnight. Seven-and-a-half hours of wrestling may seem like a long time but, when you love it as much as us, it may not actually be enough.

Sometime during the Hall of Fame induction ceremony that evening, I took a look around to really drink in what I was experiencing. To my right was my buddy Sean, a tech/design student I’d met during my theatre schooling. To my left were Jay and Kyle, both of whom I’d met as actors during that time as well.

The four of us had made the wise choice to save our energy, eat healthy, and refrain from drinking alcohol for the long night we had ahead. All very wise decisions in hindsight because, with how big a pain it was leaving The Meadowlands so deep into the night, the thing we were most excited about all year could have easily turned very sour.

We slowly walked our way towards the nearest main road through the cold rain in hopes of finding a good spot to catch an Uber, glowing with joy over what we had just witnessed. Before every “GPS-says-turn-here,” one of us would chime in with a dream match for next year’s WrestleMania. Between every “now-might-be-a-good-time-to-call-an-Uber,” one of us would drop a drastically outspoken opinion about one of the more anticipated matches on the card that night. After every “I’m-exhausted-I-can’t-wait-to-sleep,” one of us would inevitably break the fatigued silence with a recent memory of that evening’s events (“Remember when      (name)           (verb)     ed     (name)    through/into/onto/off of/out of the      (noun)      and      (verb)     ed the      (noun)      ? That was      (adjective)      ”).

We came upon a nearby gas station with a long awning to shelter us from the rain with a dozen or so other wrestling fans also awaiting their ride-shares. As we stood, I couldn’t help but wonder what a project with these treasured friends and theatre colleagues would look like.

The first task - the story. If I were to write a play about professional wrestling, what was the story I wanted to tell? We’ve already heard story about the broken-down star of yester-year confronting the sins of his decadent past like The Wrestler. We’ve already seen the women’s wrestling DIY’ers coming to prominence in the 1980s like Netflix’s GLOW. We already know (and love) the stories of crossover stars like Hulk Hogan, Dwayne ‘The Rock’ Johnson, and John Cena. Was there a wrestling story I could tell that nobody had told yet?

I could tell the story of a rich wrestling dynasty meditating on the value of their legacy like the Von Erichs or the Harts. I could tell the story of the many art-imitating-life/life-imitating-art romances and affairs that keep us on the edge of our seats, like ‘Macho Man’ Randy Savage and Miss Elizabeth. I could tell one of too-many stories of talented women being cast aside and demoted to the role of ringside valet for the male wrestlers, like Chyna or Sherri Martell. I could tell any number of stories, and too many of them sounded too exciting to possibly choose. So when I arrived back in Massachusetts the next day, I sat down, and I started writing them.