Once Upon a Time in East Rutherford, New Jersey - Part III 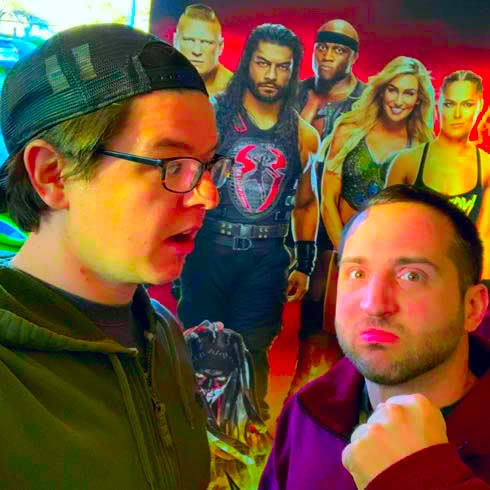 Many wrestlers get a chance to have their WrestleMania moment. Whether it’s winning the title, putting on an epic match, or simply being allowed to enter the ring. These moments are special, unique and for some wrestlers on the roster, it’s what they’ve worked towards their entire life. However, I feel the same can be said with us fans. As for me, attending WrestleMania 35 in the Meadowlands was a childhood dream come true. Being at the event could have been my WrestleMania moment, but it wasn’t. Eating at Rut’s Hut, “Home of the Ripper,” could have been my moment but it wasn’t. Nope, my WrestleMania moment took place in the hotel room, where me and my three friends (Winston, Jay, and Sean) put on one of the most epic “Hotel Room Brawl,” matches of all time.

It was hours before we had to take off for the event, and none of us could stay still. The energy in our hotel room was off the charts. I’m talking… pacing, non-stop chatter, and smack-talking like Stone-Cold right before he opens up a can of whoop ass. Jay was cutting a promo towards Winston. Winston cut a promo towards me, and Sean was ready to wrestle all three of us at the same time. After ten minutes though, Jay eventually grabbed my arm, placed it around his shoulder and gave me a beautiful Rock-Bottom onto the mattress. Without hesitation he went for the pin, but Winston wasn’t having it.

I remember looking up and there was Winston, up in the air, dropping a mean elbow breaking up the pinfall. He rolled Jay off me and the fight was on. Leg drops were flying, chokeslams were in full affect and all four of us turned the hotel room into our ring. Little did we know, this match was on its way to becoming a thirty-minute, no holds barred, anything goes, match aka The Hotel Room Brawl.

Pillows were cracking heads, ice buckets were being flung, and mattresses, yes mattresses, were being lifted off the second bed by Jay who ran full steam ahead at the three of us with it. We took the bump and played it well. All of us tired, sweating and trying to catch our breaths. That’s when I saw my opening. In the closet was an ironing board and I knew it was time to use it. I grabbed the ironing board, whacked Winston with it, but before I could turn to Jay he had already punched the ironing board directly into my head. I fell backwards, playing it off, trying not to laugh because by this point this match was straight awesomeness wrapped into more awesomeness. Jay approached me, ready for the pin, but right before he could count to three, we heard… RING. RING. RING.

We fell silent. We slowly turned towards the phone, each of us expecting the other person to answer. No one moved so I decided to answer it. “Hello?” I asked knowing full well why someone would be calling. On the other end they asked, “Is everything okay in there?” I wanted to laugh but I replied, “Uh, yeah, everything’s fine.” They mentioned that our neighbors called, expressing concern over the banging. I assured the front desk that everything was fine, and I hung up. I looked at my three friends and we all fell to the floor from laughter. Of course, our neighbors called. We literally just had a match of epic proportions.

We were four grown adults living out our childhood dreams of attending WrestleMania together. Nothing else mattered during our Hotel match. We were invested. We were imaginative. We were in it to win it and the match might have gone on forever if that phone never rang. I didn’t want the match to end. I didn’t want WrestleMania 35 to end, and I certainly didn’t want that fire I had for wrestling to end. Thanks to the Big Time Project, it didn’t. Over the course of the following year, I got to play Buck Nero, in the project and my passion for wrestling has grown significantly since that epic “Hotel Room Brawl,” match back in 2019 in East Rutherford, New Jersey.