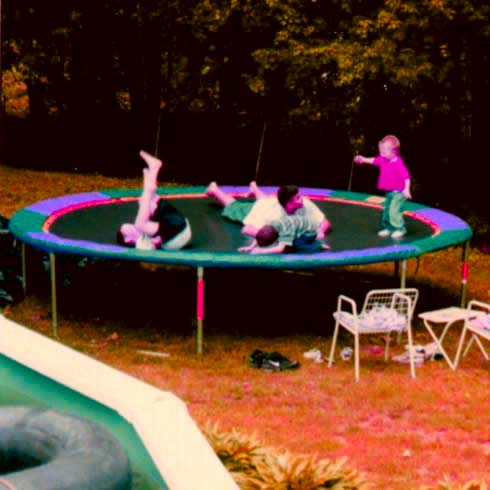 Looking back, one of my earliest memories is having a World Tag Team Championship match- my brother Evan and I versus our older cousins, Danny and Bryan, at TrampolineMania 3. I remember being suspended in mid-air, looking up at the beautiful cloud-filled sky on a July afternoon. Then, feeling the sudden whoosh of air passing my ears, the pressure of my cousin’s arm driving me back down toward Earth, the burning sensations of friction as my 6 year old elbow dragged across the top of the trampoline, The weight of my 15 year old cousin Danny holding me down,“1! 2! 3!” He shouted triumphantly. “And STILL THE TAG TEAM CHAMPIONS OF THE WORLLLDDDDD!!”

“No! No! Nooooooo, no way! Jay lifted his elbow so he was free’d,” Evan demanded that the match to continue. And, so it did. The match went on like that, for hours. Evan and I had no idea what was going on but we were having the time of our lives and we didn’t want to stop. We were hooked. From that moment on, I knew there was no way my brother and I were losing this Tag Team Championship Match.

It was a magical time really. It was the late-90s and the Attitude Era was runnin’ wild on you, your mom, your teacher, the mail man, your dog… damn-near the entire world could “smell what The Rock was cookin’!” My brother and I were still too young to watch it on our own, so my uncle taped some episodes of Smackdown for us. We wore those tapes out. Wherever we went we had at least one of those tapes to pop in the VCR. That was the catalyst that strengthened our relationship as brothers and showed us how to work together as tag team partners.

Everywhere we went, Evan and I were practicing the moves we saw on those tapes. Family went to Ocean State Job Lot, “Evan, lemme give you a Twist of Fate on the gardening soil!” Family stayed a night at a hotel, “Jay, I’m gonna Sweet Chin Music you, then jump from the bed and drop an elbow!” To our credit, nothing was broken, material or human, in any public wrestling arena that we may have inhabited.

As time passed, the trampoline was passed down the family tree. By this time, my brother and I were seasoned amateur wrestlers who practiced with a foam cot on the basement floor and used the corner of the couch as a turnbuckle. We were ready for the return of our debut wrestling arena. We picked up TrampolineMania right where we left off. We finally had our own wrestling ring. Back to where it all started.

It's 2005 and, by this time, my cousin’s trampoline had been established in their backyard for close to ten years. The mat had a few small holes in it. The spring cover was faded and frayed -- you could barely see the blue and pink designs on it. Some springs were missing and the remaining were rusted, creating a slight squeak with every jump. But to my brother and me, it was the Ritz Carlton of squared-circles, the Madison Square Garden of our back-yard, “THE GRANDEST STAGE OF THEM ALL!!” From then on, after school, every day, any weather, we were out there practicing our moves, preparing to once-again fight for those World Tag Team Championship titles. There was no stopping us now.

Evan and I were always looking to push the envelope with our wrestling. Two months in, we had two metal ladders, a pool ladder, and a stepping stool set up on the outside of the trampoline that we would use as turnbuckles. I started practicing my high flying moves. I grew to be a huge fan of Jeff Hardy. Naturally, I would stand at the top of the ladder and prepare to drop a Swanton Bomb on my seemingly-unconscious brother, only for him to roll out of the way just in time for me to bounce back up and take a Shawn-Michaels-worthy Sweet Chin Music to the face. Honestly, if you were to drive by my parents’ house, around 4:30pm you would see two middle-school children at the top of a ladder (or two), falling onto the trampoline below.

At this point, you’re probably screaming, “WHERE THE HELL ARE YOUR PARENTS!?!?!”

Well they were right there, just as they always were -- off to the side and cheering us on. They were supporting our love, passion, and obsession for wrestling but also had 911 on speed dial, just in case. With their support, the passion grew. Evan and I would practice entrances, pay homage to our favorites, and create new moves. With all this practice and preparation, we were ready to finally defeat our cousins in a Tag Team Championship match at TrampolineMania! But as we grew, so did our cousins and they were in high school and moving on to other things in their life- girls, trigonometry, driver’s licenses… Fighting each other was fun but, after a while, things became pattern. We needed something more. Evan and I needed to defend our titles against someone. So we began inviting our friends over to take part in a Connolly family tradition.