Once Upon a Time at the Hammerstein Ballroom, Part I: The Wrld on The Big Times 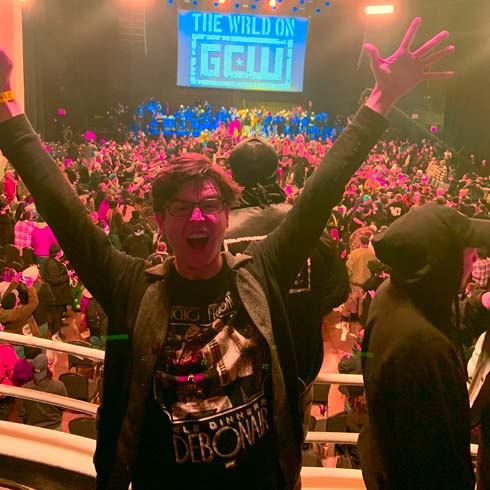 SO, FIRST OF ALL – Hey everyone! I know it's been a minute since the last time someone posted here, so thank you for sticking with us!

Little update on the project- I’ve spent the last year since our Facebook Live series working on resources for collaborators, which involved digging even deeper into the world of The Big Times. Now that these documents are reaching a point of something-resembling-completion, I’ve spent the last 2-3 months cooking up some new drafts for something that will hopefully be ready for public consumption soon.

However, with the regional/fringe theatre landscape being what it is right now, I’m beginning to consider alternatives to the “traditional” work of theatre and am interested in further exploring the multi-media aspect of The Big Times Project. As always, if you’re interested in collaborating, you can always CONTACT US HERE!

SECOND – I was lucky enough to attend my first GCW event this weekend and am just ITCHING to break it down theatrically.

“But Zach, WTF is a GCW event? I assume it’s a wrestling thing, but should I care?”

Well, in typical Zach Winston fashion, it’s a long story. But, before I get to it, it’s important that you know about the venue this event took place in- a century-old Broadway theater in Midtown Manhattan called The Hammerstein Ballroom.

Formerly-known-as The Manhattan Opera House, The Hammerstein Ballroom was constructed in 1906 under the guidance of businessman/composer/theater entrepreneur Oscar Hammerstein I and was meant to serve as an affordable alternative to The Metropolitan Opera. Four years later, after The Manhattan Opera House had achieved some success, The Met offered Hammerstein $1.2 Million (~$33 million, AFI) to stop producing works of opera, which he accepted. This led to many unique, innovative forms of live entertainment being presented in the venue including vaudeville, circus acts, concerts, plays, and sporting events including boxing and (you guessed it) wrestling.

Almost 120 years later, wrestling is still alive and well at the famed venue.

On January 11th, 1993, WWE (then-known-as WWF) officially broke ground on what would become the longest-running-weekly-episodic television show in history. That show was Monday Night Raw, and its first taping would take place at The Hammerstein Ballroom.

The show opens with a comedic segment outside The Hammerstein Ballroom featuring backstage correspondent Sean Mooney and beloved color-commentator/heel manager Bobby ‘The Brain’ Heenan bickering outside on 34th street. In the venue’s facade, a poster hangs in a lightbox commemorating the event, like it was The Phantom of the Opera ten blocks up at the Majestic Theatre, or Cats just a little way’s east at the Winter Garden.

The segment segues into a quintessential early-nineties television opening featuring drum machines and synthesized saxophones, which leads us into the sold-out Hammerstein Ballroom- red-velvet curtains with golden fringes, elaborate chandeliers hanging from the ceiling, balconies made of finely carved mahogany in a detailed design with shiny brass security bars and, in the middle of it all- a wrestling ring surrounded by approximately 1000 screaming fans ready to see a fight. But what they didn’t realize was that, despite so many signs, they were actually watching a work of avant-garde theatre.

The first two matches played out like any ballet or plate-spinning unicycle act featured over the course of the venue’s history- an exquisite variety of stunts, feats of strength, and athleticism strung together to form a robust evening of entertainment.

In the middle of the card, owner/play-by-play commentator Vince McMahon enters the ring to conduct an interview with championship-contender Razor Ramon, challenging reigning WWF Champion Bret ‘The Hitman’ Hart for the title at the upcoming Royal Rumble.

Prior to this interview, Razor sent a message to Bret by attacking his younger brother (the late-great Owen Hart) during a separate interview in a storyline that could have been plucked right out of any Shakespearean tragedy such as Claudius’ murder of the king of Denmark in Hamlet, or Edmund’s forged letter to Gloucester in King Lear.

Following the interview, Shawn Michaels (the archetypal Shakespearean lover not-unlike Lysander/Demetrius) put on a standard classic in his Intercontinental title defense, and The Undertaker (the archetypal Shakespearean sorcerer not-unlike Prospero or the Weird Sisters) laid claim to another soul in what was hardly the first act of a long, storied career.

WWE would continue their weekly/bi-weekly broadcast from The Hammerstein through September of ’93 but, by then, Raw was on the fast-track to becoming the modern phenomenon it would eventually be. The Hammerstein Ballroom took a brief leave-of-absence from hosting wrestling events until seven years later when a motley crew of Philadelphia renegades brought it back.

Raised from the ashes of what was once an expansive array of regional wrestling territories across North America, Eastern Championship Wrestling was founded in 1992. Creatively captained in its second year by wrestling-business wunderkind Paul Heyman, ECW’s mission was to present international styles of wrestling to Northeast American audiences such as lucha libré (Mexican wrestling) and puroresu (Japanese wrestling). Then, one day, one wrestler picked a second wrestler up over his head and threw him through a wooden folding-table.

And that’s when everything changed.

Heyman rebranded the company into “Extreme Championship Wrestling,” and marketed it towards the disenfranchised adult fans who had grown restless with WWE/F’s cartoonish new direction. ECW provided reality-based storylines, catered to a violent-and-vocal underground fanbase, and provided a highly unique alternative to programs like Monday Night Raw.

Heyman flirted with various broadcast deals over the years but, in August of ’99, ECW scored a three-year contract with the late TNN, a major television network, which led to ECW’s first card at The Hammerstein Ballroom in August of 2000 and, well… let’s just say it’s probably not exactly what The Big Hammerstein pictured back when taking that offer from The Met all those years ago.